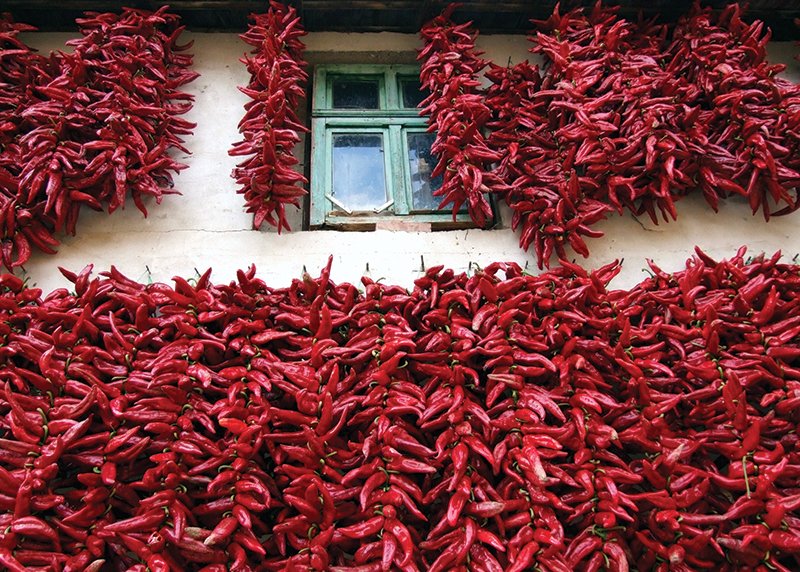 The best time in Bulgaria is at the end of summer and the beginning of autumn - time for harvesting and the traditions of their storage.

Strings of dried peppers is one of the few occasions or reasons for sincere nostalgia for the disappearing village, for attachment to our traditions, in general to the Bulgarian culinary history.

Peppers are the most traditional Bulgarian vegetable, not only because of our attachment to our birthplace, but also for the diversity of our culinary traditions - lutenitsa in all its variants, dried peppers for the winter, pickles, mish-mash or the insanely delicious dried peppers with eggs and cheese and of course the stuffed dried peppers – a tradition for centuries on cold winter evenings...

In Bulgaria, as well as in other Balkan countries, peppers were brought as early as the beginning of the 16th century by two routes – from the Mediterranean through Turkey and on the other side through Hungary, where they quickly adapted and became a national vegetable. On our lands, the plant also finds fertile soil and climate and soon becomes an important economic crop.

Typically Bulgarian varieties of peppers, including capia, have been achieved and perfected gradually by our gardeners over the centuries. Specialists claim that Bulgarian peppers have lost their connection with their ancestors from America and, under the specific conditions of our country, have formed as a kind of endemic forms with exceptional qualities. Perhaps this is precisely why we owe the preserved seasonality of capia - apparently, so far they have not found a way to grow it year-round in greenhouses in the Netherlands, Poland or Italy.

One thing is indisputable about peppers - both fresh and dried, they are not only tasty, but also remarkably useful food. They are even called a multivitamin concentrate, or a vitamin factory.

At Serena LTD we dry one of the best varieties of pepper - Kapiyata. No other pepper variety has as remarkable a flavor and texture when dried as the Capiata. The best thing is that when drying, our peppers lose only their water and retain all the useful substances. Our peppers taste like grandma's dried peppers.

So eat and cook peppers galore!