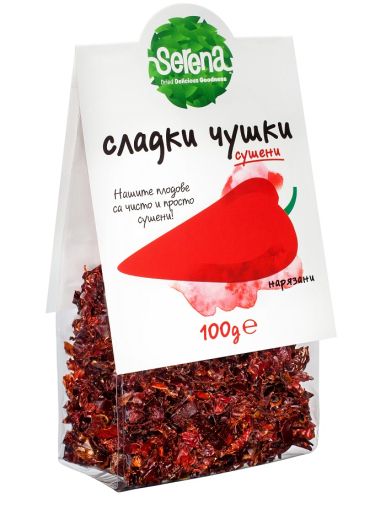 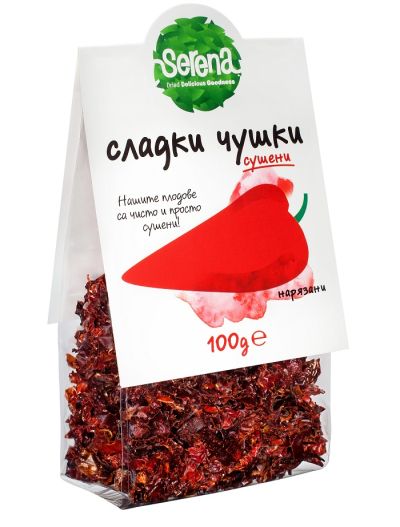 We use Sweet Red Bell Peppers. The peppers are washed, cleaned of stems and seeds, and closely examined on our inspection belts to remove unsuitable or harmed peppers. Then the peppers are dried until they become with red to dark red color. In the process of drying only the water is removed, leaving the stores of nutritional substances, flavor quality, and aroma of the peppers completely intact. Our company produces completely NATURAL dried peppers without any additional processing or preservatives!

Storage : Keep in a cool and dry place preferably in an airtught container/bag.

Dried peppers are an essential part of authentic Bulgarian cuisine. There is not any Bulgarian housemaker, who does not know at least a few recipes using dried peppers, pleasing even the most discriminating palates. With the preparation of whatever recipe you use with dried peppers from Serena Ltd., you will experience unforgettable flavor, aroma and culinary pleasure!

Storage: Store in a dry and ventilated place, preferably in a closed envelope / box. Keep protected from moisture !!!

Peppers also have healing properties due to their high content of vitamin C. They save people from backward countries from serious diseases and complications.

In warm countries, where food is difficult to preserve, especially meat, peppers with their bactericidal properties are very useful: they block the growth of bacteria in food, even without cooking

Since the seventeenth century, doctors have prescribed peppers in powder form to people suffering from sciatica, as well as for problems with digestion and flatulence.

Modern doctors have confirmed the prescriptions of their predecessors, proving that they stimulate gastric secretions, promote the excretion of gas in the intestines and act as a powerful vasodilator of the circulatory system.